The fear of outliving finances is real among Canadians… but it’s more real among women than among men, even when you control for important matters of money; income and investable assets. Consider the analysis in Exhibit 1, below. It shows investors divided by both gender and asset levels… and reacting to our bellwether statement, “I’m afraid I might outlive my finances.” It demonstrates quite clearly that there is a consistent apprehension gap between men and women with respect to the fear of outliving their finances. Men are less fearful than women about the possibility of outliving their finances, regardless of the level of assets they have accumulated.

Exhibit 1. Fear of Outliving Finances by gender and by asset levels 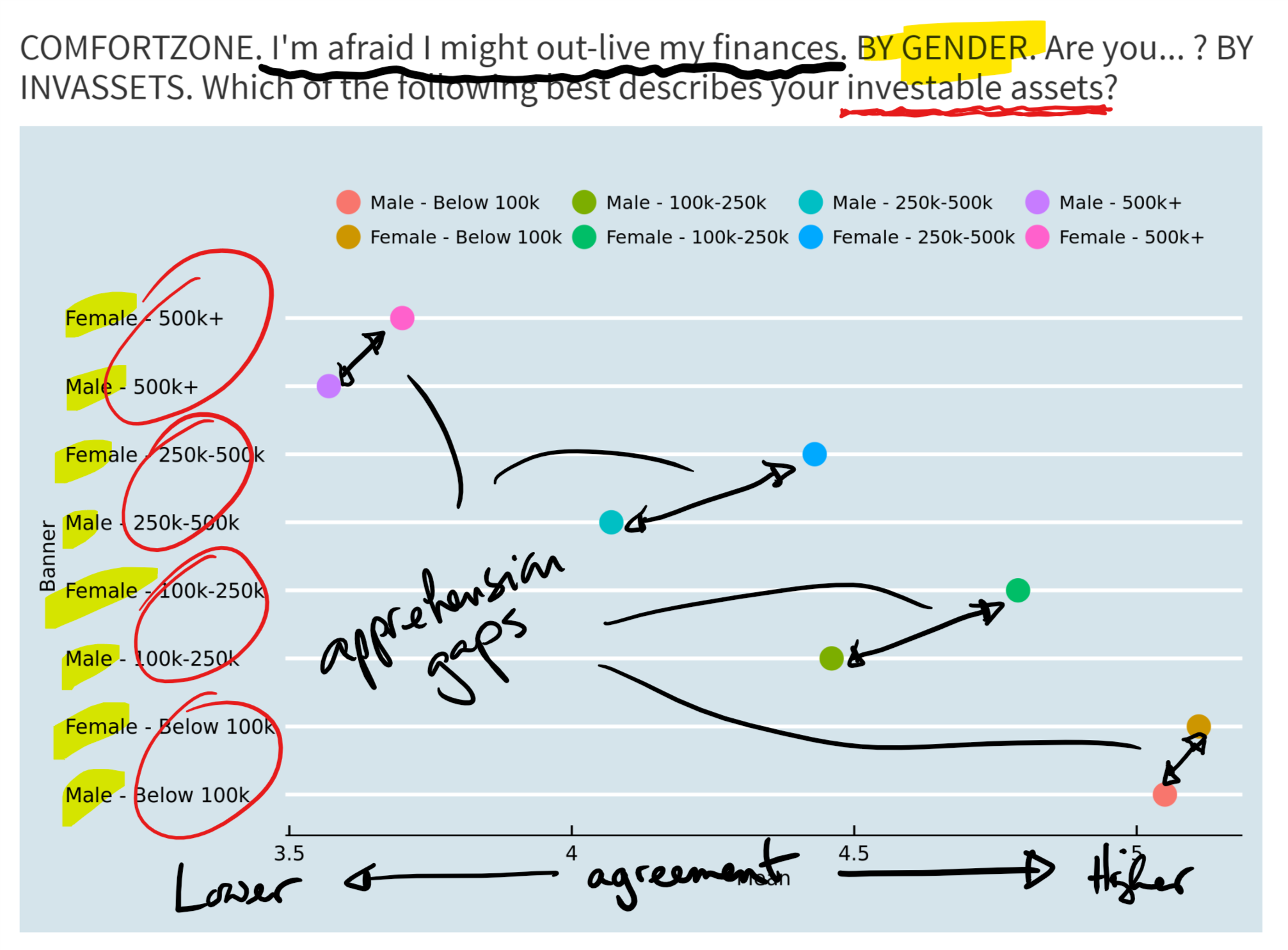 We have a similar set of findings when we analyze things by income levels rather than assets… admittedly a correlated factor. There is a consistent apprehension gap between the genders and income levels are a clear driver of apprehension. At every level of income, women are more concerned about the possibility of outliving their financial resources than men. And, as income levels rise, apprehension diminishes.

Exhibit 2. Fear of outliving Finances by gender and income levels 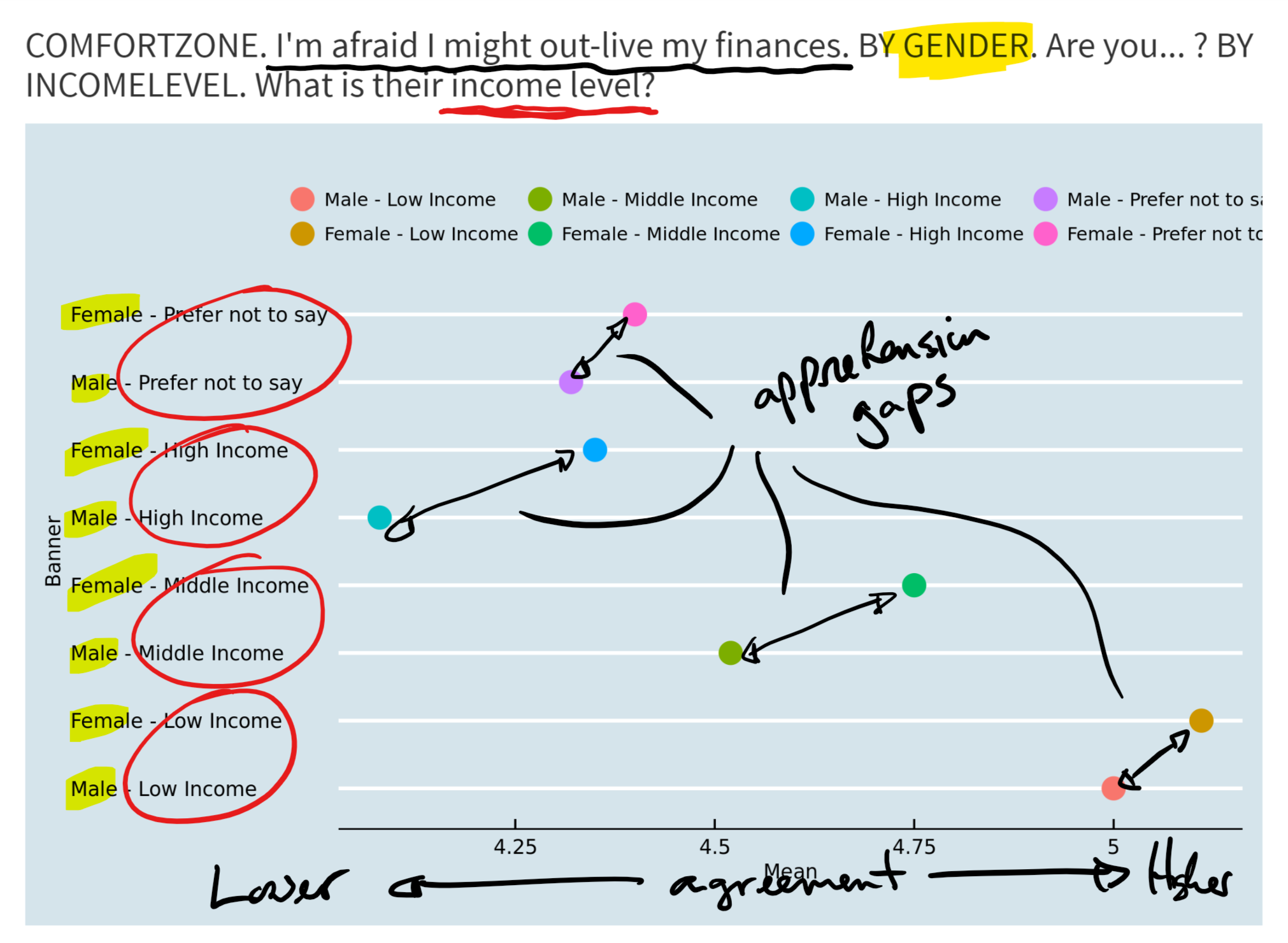 Though we draw the conclusion that there is a clear and significant difference between the genders with respect to the fear of outliving finances, what does this mean for the Canadian wealth management industry and for financial advisors who are doing what they can to manage relationships with clients?

Men and women are different. What next?

To treat them with respect, appreciate that they are different. Messaging should certainly consider and respect the apprehension gap that exists between men and women. Treating people with respect does not mean treating them as though they are either dumb or foolish, however. It means taking the time to listen and to learn what they think and how they feel before barging in with direction, opinions or ideas that may not be welcome.

From a product demand perspective, this apprehension gap suggests that women may be more receptive than men to principal-protected and lower risk investment alternatives. It’s important, however, that each investor be assessed on an individual basis by an empathetic advisor. Investment strategies that provide security into the latest stages of an individual’s life may be more interesting to women than to men despite the fact that both need protection. From a connection perspective, women may, because of their higher levels of apprehension, find that messages and stories related to the creation of protection against outliving finances more resonant than men.

NOTE: This research is a product of The Financial Comfort Zone study, an ongoing, cooperative research exercise between Credo Consulting and TC Media’s Investment Executive. Each month, Credo interviews 1,000 investors. We ask a number of questions consistently in order to monitor Canadian investors’ evolving perspectives on a host of financial matters. Questions about this or other Credo work? Call us at 905.919.1926.

Q. Where does literacy end… and financial literacy begin? A. It doesn’t matter; efforts to drive either also drive wealth development potential… so educate people… people! Education and Wealth Are Related.  Here’s Proof Let’s start with this.  Education is a driver of wealth, in case anyone forgot to mention it. …